In 2013, Lin Jui-Hwa revealed wood-fired works fired at 1551℃. In 2016, he even set the Guinness World Record of 1563℃, the highest known temperature for wood-fired ceramics. However, hidden behind these figures is a deeper meaning and a vision for the future of ceramics.
30 years ago, unable to bear seeing the downfall of the traditional ceramics industry he is dearly attached to, Lin gave up a promising manufacturing job to return home and work with his father in ceramics. He had hopes of taking the dwindling industry on a new path. In the past, his father's ceramic factory mainly manufactured flower pots. In order to transform the factory, they also began developing crafts and arts, making improvements to the form and the glaze. Evolving with the times, he also began delving into various glaze formula, doubtless intending to increase the value of the product. As if by fate, he decided to leave what he had accomplished in nine years of studying gas kilns and chemical glazes, and return to creating with the most traditional wood-fired kiln. After 20 years of exploring, he was able to reach 1500 degrees Centigrade, a previously unfathomable temperature, and from it, he found a new trajectory for the future of ceramics.

As early as three- to four-thousand years ago, during the Shang Dynasty in China, they were able to produce what is now known as the proto-celadon, a natural glaze formed by falling ash. It was only later, because the invention of celadon in China was so significant, that the name of its primitive form was fixed to one glaze color. Along the way came various forms of artificial glazes, such as the "green glaze" of the Han dynasty that got its color from copper; Tan dynasty's "Sancai," or three-glazes, that uses lead for color; the Song dynasty's famous "celadon" and "tenmoku" whose color came from iron, and "Jun glaze" from copper; and the "blue-and-white" glaze that uses cobalt from the Yuan, Ming, and Qing dynasties. The influence of these beautiful glazes that cover porcelains even today are far-reaching. Before his encounter with wood-firing, the history of glaze development had also left a deep imprint in Lin. He also dreamt of creating a beautiful glaze never before seen that would allow him to shine in the world of ceramic art.

But in 1994, during the wood-firing event "Rekindle the Ancient Kilns" held by the Ceramic Arts Association of Taiwan Province, Tsai Jung-Yu's casual remark "The most beautiful piece is still within the kiln walls", led Lin to contemplate the origin of the glaze. He observed the inner walls of the snake kiln every day for an entire year. What he saw was the bulky and diverse kiln sweat that accumulated on the mud bricks after years of wood-firing. While producing pottery in the past, he avoided kiln sweat at all costs, and never took a good look at them. After closely observing the kiln sweat, he was profoundly amazed, and wanted to present this beautiful and natural glaze color in his own work. And so, Lin went back to an even more primitive starting point - using wood as fuel, without any glaze. The pieces, tempered by the high temperature, are allowed to return back to its true state, and let its natural quality shine through.

After years of hard work, Lin was able to successfully deposit the kiln sweat onto his works in 1999. In 2001, he announced the "Multi-Colored Kiln Sweat". Lin pursued further studies as an artist-in-residence in the Shigaraki Ceramic Culture Park in Japan in 2008. There he met Koyama-sensei and was deeply moved by her artwork, knowing she had already released "natural glaze" back in 1975. From the mark of the fire to the flowing jade green glaze of the proto-celadon, and the carbon deposits, that Koyama-sensei has thorough mastery of the various wood-firing textures below 1350℃ deeply impressed Lin. Although the two could not understand each others' words, they shared a deeper connection through their works on their common journey of wood-fired ceramic art. Meeting Koyama-sensei prompted Lin to transform again, going from Multi-colored Kiln Sweat to move on to investigate higher temperature levels, a practically unexplored realm. With the announcement of the Mother Glaze, a new course for ceramics was charted. 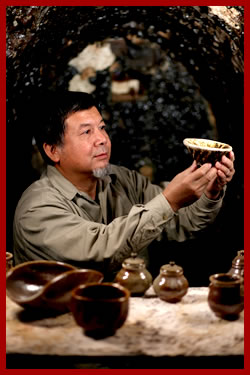 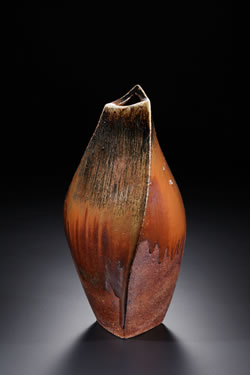 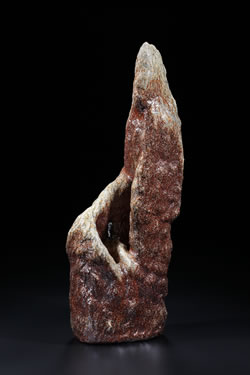 In 2012, Lin once again broke the limits of wood-firing, announcing creations fired at 1500 degrees, and explained his idea of the Mother Glaze: What is different between the Mother Glaze and a natural glaze? Natural glaze is an important piece in mankind's history of ceramics that bridged the neolithic age and the age of hard pottery. Because of the invention of the kiln, pottery became more than just about firing clay, but also melting the ash that falls on the surface of the wares to create a glazed surface that is a blend of the melted ash and fired clay.

The Mother Glaze, meanwhile, is a change from within the clay. The natural minerals inside the clay body melts and combines with the falling ash of wood-firing to become one with boundless possibilities. The Mother Glaze is not about the pursuit of outer beauty, but the essence of clay and fire. Changes within the clay body is caused by the most natural wood-firing, and the rare elements inside transforms to create the Mother Glaze. Using the most natural method to fire the clay and obtain a natural gemstone without refining the ore, the innate beauty of the clay is brought forth. This is the Mother Glaze that Lin wants to popularize.

The traditional pottery industry deals with the clay and the glaze separately for stable control and improved yield. For the sake of the shiny layer of glaze, no one ever wants their artwork dripped upon by kiln sweat. Modern ceramic artists also do not want to fire their pieces beyond the temperature that the clay can withstand since it may collapse and stick. Lin Jui-Hwa has spent 20 years on his journey of high-temperature wood-firing. He is after more than just a higher temperature on paper. Most importantly, he wants to overturn the misconception humans have about the use of clay and fire. Current ceramic technology goes to great lengths to refine large amounts of earth and metallurgic powder just to obtain that layer of beautiful glaze. However, that beauty comes at the grave price of environmental disaster.

1500 degrees Centigrade is the highest currently known temperature that can be produced by wood-firing, although aside from the high temperature, there is a higher purpose. Lin promotes the Mother Glaze with a heavy heart as he wants to reflect on how we humans use fire and clay. Without over-harvesting clay, without refining heavy metals, we can create in the kiln something similar to the gemstones formed naturally underground, bringing positive energy into people's lives. We can learn from the planet and present the elements of the natural world in the form of the Mother Glaze. Lin Jui-Hwa truly believes he is on the path to the future of ceramics for mankind.