In 2016, he took on the challenge to set the Guiness World Record for the highest temperature in a wood-fired kiln and applied for an adjudicator to verify the record on site.

In the 1980's, the traditional pottery industry in Taiwan was at its lowest point. At the time, my father's traditional pottery plant was making flower pots and everyday ceramic wares. As orders dried out due to the slumping economy, he was forced to make the tough choice between shutting down or transforming the plant. So, I told my father I was going to learn the craft of traditional pottery from the ground up, and try to find a way through craftsmanship. My father and I made adjustments on the fly to find a viable way to continue this industry, and in a blink of an eye, almost twenty years have passed.

It's through this transformation that I was able to receive new messages, new concepts in ceramic arts. At the time two people gave me two directions for the future, both of which I have worked towards in the last two decades

One direction came to me during the Rekindle the Ancient Kiln event hosted by a ceramic art group I had joined at the time. The precious words came from someone who had been in the industry before me: "The most exquisite work, the most beautiful glaze colors, are on the wall in the kiln." These words touched me deeply, and led me to contemplate its meaning.  When all is said and done, was this event successful? Was there anything that could have been done better? Or was there some deeper meaning to it, and if so, what is it? Because of this event, I spent some time inside the snake kiln at noon every day for nearly a year to think about the meaning of those words, and eventually I found the answer: "The origin of the glaze". Kiln sweat is the mother of glazes. If I can fire the mother of glazes in the kiln, that is the future.

The other direction came from fossils. During this event, I was to clear out all of the artwork from the Snake Kiln. One such set of ceramic table and chair was sold to that second man who changed my life. I delivered the works to his house myself, and that granted me the opportunity to see fossils native to Taiwan and appreciate its beauty, and preciousness. Since that day, I have been enthralled with fossils. From excavating to studying how they are formed, from temperature changes to crystallization, I compiled a "theory of rocks" - Mother Glaze, transmutation of ceramic wares. Understanding the transmutation of ceramic wares strengthened my conviction in wood-fired kilns.

What is the significance of firing at high temperatures?

Only after firing with wood did I realize that artificially refined glazes are not necessary to create colorful glazes in a wood-fired kiln. The key to firing a variety of natural glaze colors lies in the temperature, and to fire natural glazes that form at high temperatures, what's needed are a kiln that can fire at such high temperatures and the skills to operate it. So in the past couple of decades, I have continuously studied how to build wood-fried kilns and improve upon the techniques for firing it. With more than a decade of experience firing the snake kiln, and my father's expertise from building it, I finally achieved a temperature of over 1400℃ in a wood-fired kiln. After such hard work over such long time, I was finally able to, on my artwork, recreate the texture of the kiln sweat, something that has been isolated on kiln walls for over three thousand years. This is the greatest breakthrough in my entire life. Being able to fire kiln sweat has bolstered my confidence in wood-firing. I built a downdraft wood-fired kiln in 2012 and broke the 1500℃ barrier, and fired kaolin clay into a mineral-like transmutated ceramic ware that I call Mother Glaze. The concept of the Mother Glaze comes from the theory of rocks. The earth is the world's biggest kiln: it fires ceramics, or rocks: from regular rocks to quartz, crystals, jades, gems, diamonds and future rocks. This conclusion is one drawn from two decades of collecting fossils and firing kiln sweat. The Mother Glaze is a transmutated ceramic ware; this is Future Ceramics.

Why set a Guinness World Record?

When I said, twenty years ago, that a temperature of over 1400℃ can be achieved by burning wood, everyone would say that's impossible. In 2000, I published "Trial by High Temperature Wood Firing" in a pottery magazine in which I consistently reached 1430℃. Everyone was doubtful that such a temperature could be achieved by burning wood. In 2012, the China Times and United Daily News reported that I had reached 1516℃, and some people who had seen the report couldn't believe it. A friend in the industry asked me in person if I could reach such a high temperature, why not set a Guinness World Record? All of the problems I faced were about impossibilities. So why can't we ask, what can we do to reach such a high temperature? What's the meaning of such an achievement? It's not about the temperature itself, but about the significance behind it. When firing a wood-fired kiln, if the wood does not burn completely, the temperature would not rise so much. If the smoke produced by the burning wood could not be burnt as fuel in the kiln, it would be even more difficult to reach a high temperature. Therefore we can say that if we can reach a high temperature, the firing is definitely eco-friendly, energy-conserving, and carbon-reducing. In 2014 I published a book on the Mother Glaze, while at the same time held a solo exhibition at Hong Kong University of Science and Technology. In 2016 I set the Guinness World Record at 1563℃. In the process of setting this record, everyone present, including the adjudicator, witnessed how wood-firing could be eco-friendly, energy-conserving, and carbon-reducing. This entire process was recorded on video. Wood-firing could create the transmutated ceramic ware - Mother Glaze, or Future Ceramics, the hope of our future as a race. 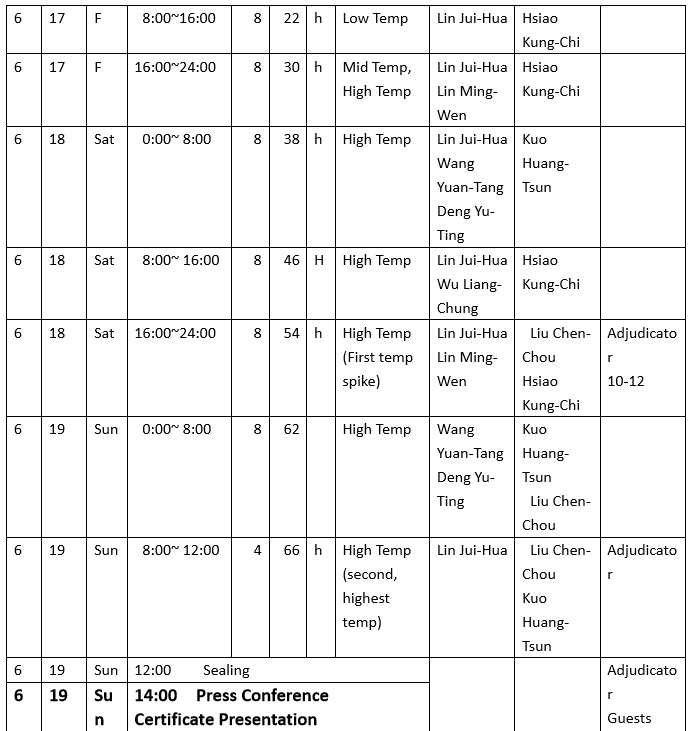 Taiwanese Professor Liu Chen-Chou of National Taiwan University of Arts and Dr. Kuo Huang-Tsun of Industrial Technology Research Institute were invited as independent witnesses. Once the empty kiln was confirmed, 150 green bodies were loaded in order into the 0.6 m3 chamber. In the afternoon, Thermoway's expert temperature measurement team installed professional temperature sensing instrument, the high temperature thermocouple. At 5 PM, the chamber is sealed with Dr. Kuo as the witness. 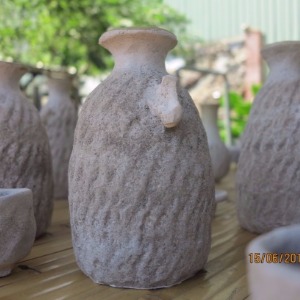 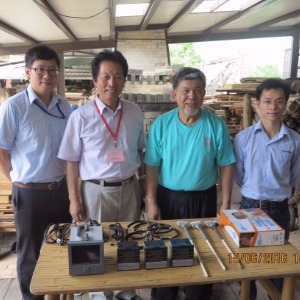 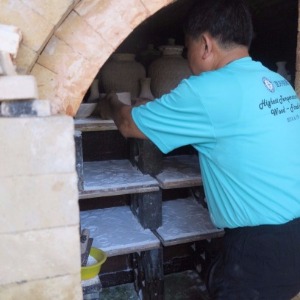 In the morning with the two witnesses present, two Kiln King Chawan green bodies were placed in the firebox. The Kiln Kings are the most unique and exquisite pieces of artwork in every firing. Since the firebox is the most dangerous location, when the firing is successful, the piece fired in the firebox turns out to be the King of the kiln. However, the chances of the piece shattering or sticking is high and the success rate is low. For every firing, there are only two small corners in which two chawans could be placed. So if this attempt at setting the Guinness World Record is successful and the pieces can withstand the 1500-degree heat without damage, the Kiln King Chawans are most deserving of its name.
During the sealing of the kiln, a unique wood-firing technique was revealed: Lin Jui-Hwa not only limits himself to the use of waste wood to fire the kiln, he was able to load large amounts of waste wood before sealing the kiln to keep the kiln firing at a low heat for 12 hours straight. This is one of the unique Lin Wood-Firing Techniques that he is promoting.
At 530 PM, Lin Rui-Hua, independent witnesses Professor Hsiao Kung-Chi, Associate Professor of Fu Jen Catholic University and Dr. Kuo Huang-Tsun, together with the Snake Kiln team, performed the rituals to worship the Kiln Spirit, and thank the founding master for the wisdom of earth and fire.  The kiln was then lit to mark the beginning of the 51-hour nonstop firing.

ＤＡＹ３ 6/17 - low to mid temperatures
After one night and one day of drying the kiln at low temperatures, the temperature had successfully risen to 1000 degrees by 5PM, faster and smoother than usual.。

ＤＡＹ４ High temperature. Setting a record of 1563 DegreesAt 10AM with witnesses present, Lin Jui-Hua and his team reached the 1500 degree official challenge mark earlier than expected and continued to march toward super high temperatures to challenge his personal record of 1555 degrees. The temperature had reached 1563 degrees before 9PM, and the adjudicator from Guinness World Records was on hand to verify the results.

With official adjudicator John Garland present, the certificate presentation and press conference were held to share the honor and joy of setting the world record with the Snake Kiln team and friends of Zhunan Snake Kiln.